Debating the future of irrigation 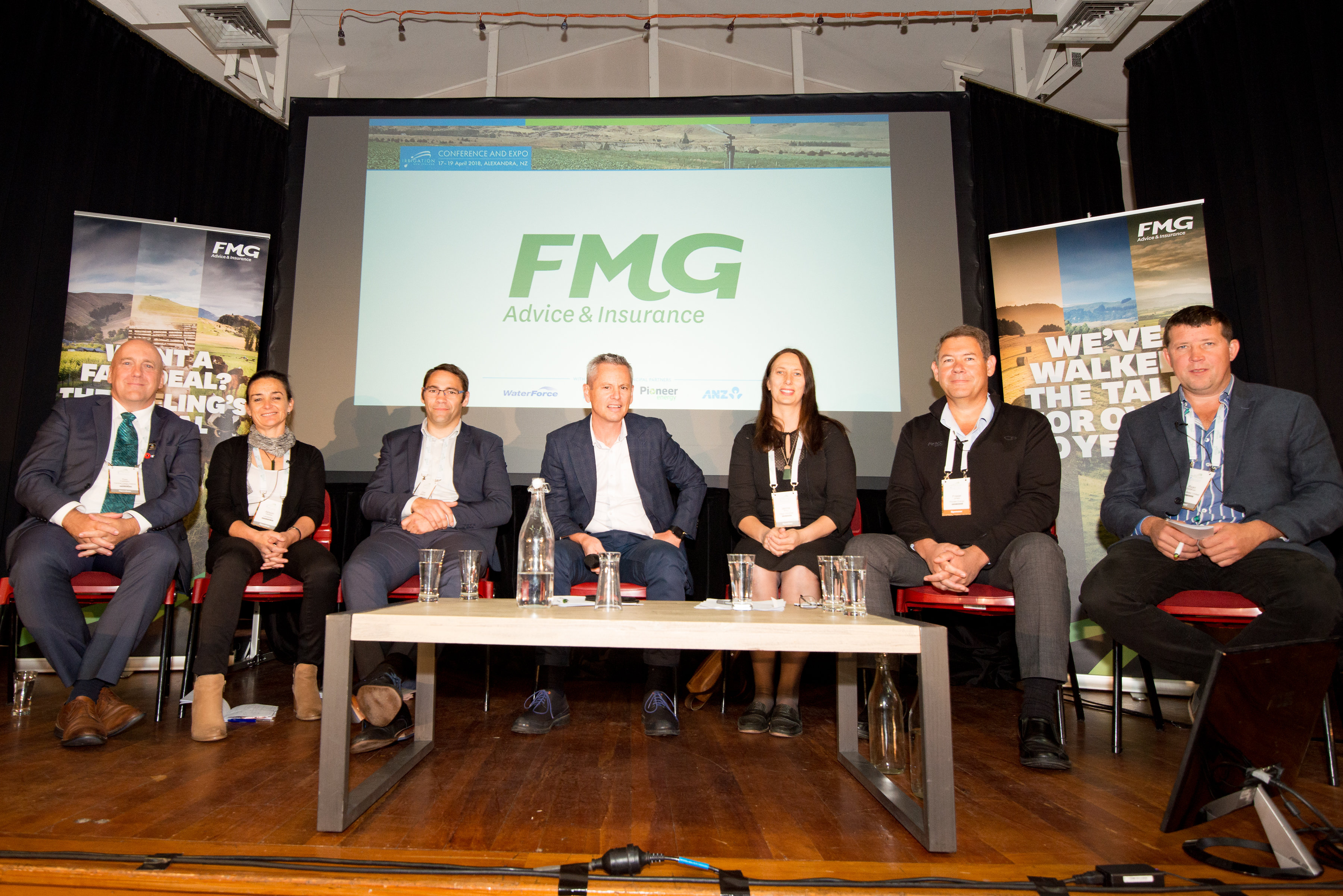 Who will be affected most by the government decision to halt irrigation funding?

Tim Cadogan: In this valley we have the Falls Dam in the Manuherikia. We were hoping that Crown Irrigation was going to be involved in three ways: firstly the dam was built in the 1930s and it needs about $20 million invested to get it up to modern standards, number two there is a minimum flow coming on to the Manuherikia River. We don’t know what that will be yet, we do know it’s almost assuredly going to be higher than it currently is so there’s going to be some lift in capacity of the dam required, and thirdly a very small amount of new irrigation. Most of the cost of the dam is going to be fixing the dam to meet safe standards and for environmental flows. We only have 20,000 people in Central Otago. For the farmers it’s a huge investment to fix the dam and get that minimum flow and the government has pulled the funding out from underneath us. There’s a risk to that project from the government’s decision. The government’s focus was stopping mass expansion of irrigated soils – this has almost nothing to do with the Manuherikia project.

Do we need to move on from large scale intensification? Do we need a new strategy?

Dr Alison Dewes: I agree. If we look back the past 25 years we’ve had mass land use change on vulnerable soils. 800,000 hectares of irrigation of which 60 to 70% of this is on vulnerable soil types with a monoculture of mainly irrigating pasture, mainly with animals using significant amounts of water and a big spill over. That spill over also affects municipal water supplies, drinking water supplies, cultural and recreational areas. We’ve gone very hard and fast in one direction and we need to pull back and think about that. I’m not in disagreement with the government clipping the wings of the irrigation funds because it’s not a bad thing to pull back, stop, look at things and where we need to go. I’m in support of irrigation being used for high value crops with well managed water use and considerate of environmental flows. Irrigation in general is being used for a monoculture – cows and water on vulnerable soils.

Jacinta Ruru: Taking a pause and considering how the law and policy can recognise Māori interests in water as part of a bigger national debate has been really important for us as a country. We still have a lot of really hard questions on the very near horizon to answer.

Would a tax on bottled water be a trigger point for putting a value on Maori rights to water? Jacinta Ruru: Absolutely. Once you put a value on water, the government is saying that there is a value in water, water is a property, it has property rights and once we enter into that the government must address what are those Māori rights and interests in water. Māori have been advocating for the law to recognise their rights in water right back from the late 1800s there were court cases coming through. So there’s nothing new here. In the past 20 years it’s become much more prominent. The National government in 2008 in a Cabinet Paper recognised that Māori have undefined and unresolved rights in water. The Waitangi Tribunal has been at the forefront of this as a permanent commission of inquiry with a range of experts hearing evidence from the Crown and Māori around what are those interests today and what do they look like going forward into the future. We’re still allocating water on a first come first served basis.

Do we need to change our water allocation system?

Con Williams: It does need to be changed. New Zealand is behind the times. It is a very inefficient model for allocating water. Some sort of tradeable water system that is well constructed would serve New Zealand a lot better. I also think it would lead to better conversations around the value of water.

Alison Dewes: Having farmed and been an irrigator in Australia from 1997 to 2009, I think Australia is about 25 years ahead of New Zealand. We were a surface take irrigator on a dairy farm with 600mls rainfall. We had an environmental protection guy come in with total access to our meters and reading. I was also working at a bank and the value of water went from $100 per tradeable megalitre depending on its source to $800 per tradeable megalitre depending on its catchment source and reliability – this was in the late 1990s and early 2000s. New Zealand hasn’t even got a structure yet, we’re still waiting, still basing our allocation on grandparenting effectively, first in first served and we’re also doing that for pollution. I really find it quite archaic, especially around pollution rights or nutrient headroom. Across 60% of New Zealand it’s still grandparented.

Would Labour’s water tax have encouraged people to use water more carefully?

Con Williams: If you look at the water tax in terms of valuing water you need a tradeable system to do that to start with. If you look at the objectives of the water tax that was to increase money to fund projects to improve water quality. A better efficiency would be to tax to the externality that you are concerned about, for example nitrate or phosphate. I think one of the challenges around these sorts of taxes is it would be quite expensive to collect, if you look at the dead-weight cost of every dollar collected it’s probably going to be 30 cents used in compliance and other costs. The better way is that the money stays in the landowner’s pocket but then there is associated regulation that investment flows directly to addressing the issues at the community level.

Fraser Jonkers: I came to this country because it’s safe and clean. But we are not that clean or green. We’ve got a reputation in the world to protect and we all benefit from that and that’s our future. I think if we don’t get irrigation, farming or even tourism right then we’ve got a problem. I do think we will be more sustainable than today in 2025.

Ryan O’Sullivan: What excites me about irrigation in the future is if you look back we used to irrigate with border dykes and then shifted to travelling guns and booms we saved 20% then we moved to pivots and saved another 20% and now variable rates are showing 10 to 20% savings. What’s next? We are getting more and more efficient with our water use. As we do that the spillover is starting to be mitigated and managed and this tech age we live in now with the sensors we can now have on our farms is quite exciting and it’s going to have some good environmental outcomes.

Jacinta Ruru: Where we have come in the past ten years as a country is enormous, how we now have this platform for engagement with Tangata Whenua. There’s a whole level of respect there that I think is really exciting for us moving forward. The real innovation that we’ve shown as a country around the Whanganui model, the legal personality, around recognising throughout the country the health and wellbeing of our waterways absolutely reflect back on the health and wellbeing of the communities and Māori communities across New Zealand. We have to get this right, it’s a big issue for us as a country to clean up our waterways and Māori have some real answers to contribute. I am really excited, I think the law and policy is catching up and we have a positive movement forward.

Con Williams: The big picture view for New Zealand is we are a small, open trading country and for a long time we lived beyond our means particularly in terms of income generation and being poor savers. Irrigation fits into generating income, so with all the things we have talked about I’m optimistic that we can walk that tightrope to balance things out and take an intergenerational view. We shouldn’t lose sight of the fact that New Zealand is quite wealthy in terms of renewable resources and when we overlay things like climate change, relative to other countries we are potentially going to become even wealthier. We do need to work out how we can work together to balance these things out and make the most of that opportunity.

Alison Dewes: I’m really positive because it seems that we have agreed that there is a problem and when we do that we can spend the rest of the time working on it. I think we have to stop fighting court battles that are costly for everyone and we have a collective responsibility for our country and for our children to protect our brand. We need to have transparent conversations. We’ve actually got really good science to tell us where we need to go for eco-system health it has to be picked up by each region. We’ve got to penalise pollution to drive efficiency. Water footprinting of foods, including the amount of grey water needed to dilute pollution is also coming.

Tim Cadogan: David Parker said last week in a water symposium that the government’s first priority is to stop further degradation of waterways. We’ve got a pendulum that’s swung too far one way, its swung back the other way that’s going to stop and it’s the speed with which its going to come back and the economy’s ability to adapt that’s going to be the crucial thing. We’ve got to adapt, we’ve got to change but how much of an impact is there of doing that? We have three dates that are running up here: in 2020 we are off border dykes and onto more expensive and far better forms of irrigation, in 2021 we go off mining rights and into resource consents, and if it goes to an Environment Court hearing it may be 2023 before we know what the minimum flow will be in the Manuherikia. So how to you pay for your pivot irrigation and what do you put down for your resource consent if you have no idea how much water you’re going to be able to have? We need to move this forward and the only way we can do as a community is through conversation to get agreement and not through the Environment Court.