Looking at the future potential, the NZIER report of 2010, states increasing irrigable area by 350,000 ha increases national GDP by 0.8 %. A 2012 report by AERU, based on 500,000 ha of existing irrigation in Canterbury with a further 250,000 ha of new irrigation, reinforces this. It demonstrates the Canterbury economy receives an additional $2 billion in revenue, and just under 8,000 FTE’s, from the increased irrigation. For New Zealand wide impacts these numbers rise to $3 billion in revenue and just under 8,400 FTE’s.

There are considerable flow-on economic benefits to the community from irrigation. The Opuha Dam and the North Otago Irrigation Company ex-post studies show that farm expenditure, gross farm revenue and farm employment opportunities typically increase threefold when converting from dryland to irrigated agriculture. There are also large social benefits, including a higher household and personal incomes and a higher proportion of the population in full-time employment. 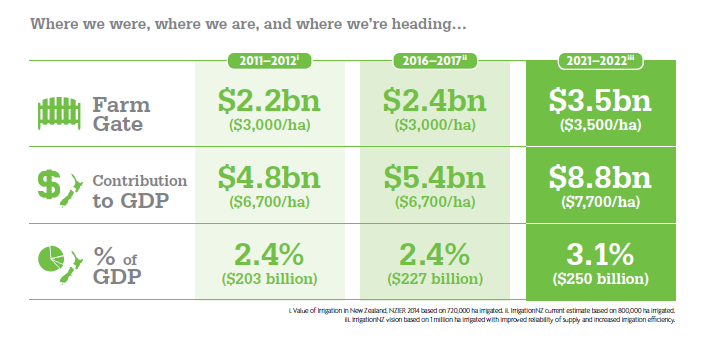