Large-scale irrigation in New Zealand began in the late 19th century. During the Great Depression of the 1930's, several large-scale storage and irrigation projects, such as the Rangitata Diversion Race, were built using government funding. The majority of major schemes were constructed after 1960 in the Canterbury and Central Otago regions.

The following map shows government-owned irrigation schemes prior to 1989, and the number of hectares they irrigated. It excludes on-farm irrigation owned by private individuals or entities. 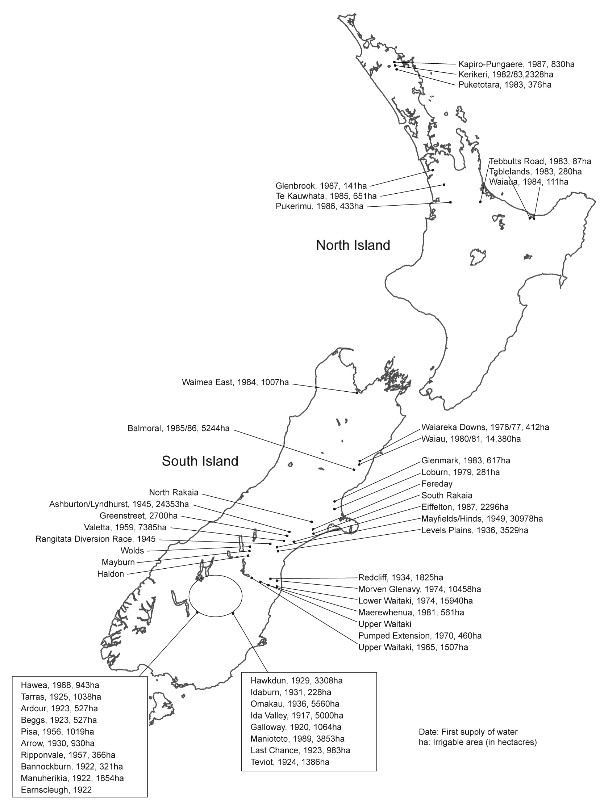 The rationale for government involvement in developing, subsidising and maintaining community irrigation schemes changed from period to period.

The sharply contrasting ways in which community irrigation schemes in New Zealand were developed and managed before and after 1990 illustrate the operation of decentralised vis-a-vis centralised (planning) industry governance systems. While the evidence is not easily quantifiable, what evidence there is suggests that the shift to a decentralised system that took place about 1990 coincides with improved irrigation efficiency. Today, farmer owned companies - rather than State owned - are responsible and accountable for scheme development and management. In combination with the RMA - which enables a decentralised approach to resource use - this has facilitated innovation in scheme design, more efficient management, and better water use. It has also revealed more precisely the value of water in irrigation. This decentralised system has also highlighted the difficulties for many communities to raise early commitment and funding to determine the viability.