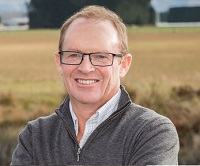 Randal is an arable and beef finishing farmer with 307 hectares under irrigation at Ashburton. Along with Louise he has a family of four children. They also operate an Agricultural Contracting business and own a pre-school in Ashburton. On their property he has had involvement in the evolution from some dry land to border dyke, wide borders and the transformation to overhead irrigation, which now encompasses their entire effective area. They have been early adopters of soil moisture monitoring, VRI and fertigation – technologies that are now foremost in their farming operation.

He has been on the Board of Ashburton Lyndhurst Irrigation Ltd (ALIL) since 2016 including being a member of RDRML’s Audited Self Management (ASM) committee that was integral in establishing and implementing the FEP (Farm environment plan) dashboard. He has completed an Institute of Directors governance course that was focused on irrigation scheme directorship.